There is now an LED alternative to all of the traditional incandescent, halogen and CFL (Compact Fluorescent Lamp) light bulbs previously used in households and businesses. LED light bulbs offer energy savings of up to 90% when compared to halogen & incandescent and they last for 15 to 40 times longer.

In the lighting industry the correct term for a light bulb is a lamp. LED light bulbs with cap types such as GU10, bayonet cap and Edison screw etc are known as retrofit lamps. A light bulb has a cap type and a light fitting (or luminaire) has a socket. These types of retrofit lamps can be easily replaced without needing to call out an electrician. Its as easy as replacing an old-fashioned light bulb, you just un-screw it and replace it with the LED.

Downlights can be a bit more complicated, as there are many different types such as integrated LED downlights. These technologically advanced fittings come with a fully integrated LED light source which is non replaceable.

Although the main savings to be made by switching to LED is from energy consumption, if you compare purchasing 1 GU10 LED at a cost of £5 each, compared with 40 halogens at £1 each, you can make a saving of £35 per LED over the lifetime of 40,000 hours. This saving is based on just one lamp and is because 1 LED lasts for as long as 40 halogens! 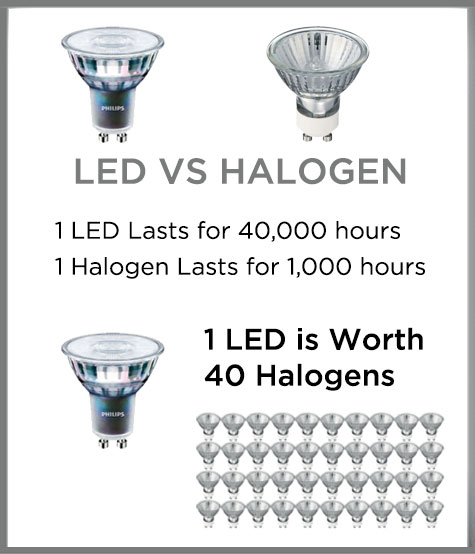 According to the Energy Saving Trust, lighting accounts for 18% of the overall electricity consumed in an average UK household. By converting all of your existing lights to LED light bulbs you can reduce your overall electricity bill by around 14%. In real terms an £80 per month electricity bill could be reduced to £68.80, making a saving of £11.20 per month or £134.40 per year! The initial investment in LED lighting soon gets repaid, over and over again!

Halogens and traditional incandescent lamps last for only 1,000 hours and good quality LEDs like the Philips MasterLED Expert Colour range last for 40,000 hours but what does this equate to in years? If you were to keep your lights switched on permanently 1,000 hours would only last for 41.6 days but an LED would last for 1666 days or 4.5 years. However, there aren't too many people who leave their lights on in the daytime or when they're asleep so if we base our calculations on 3 hours per day, a halogen would last for 333 days, almost 1 year. Compared with a 40,000 hour life expectancy LED that would last for an amazing 36 years.

When you're making an investment in LED lighting it's always better to go with recognised brands like Philips, Aurora and Crompton. These brands are now in their 4th and 5th generations and are manufactured to higher standards. Incorporating better quality LED chips and improved heat sinks for improved heat dissipation.

Here are the most popular LED light bulbs and cap types used in modern day lighting and available on Downlights.co.uk. If you're looking for a low energy alternative remember to compare the lumens and not just the wattage. Lumens represents the brightness, ideally you want the lowest wattage light bulb that has the highest amount of lumens, this is known as efficacy and is calculated by dividing the lumens by the watts (lms/W). For example a 5.5W LED with a light output of 400 lumens has an efficacy of 73 lumens per watt. A 50W halogen with 400 lumens would be 8 lumens per watt and you lose around 10% of light within the reflector.

Bayonet caps are a UK thing and it's unlikely that you'll find any overseas apart from countries like Cyprus and British territories like Gibraltar. BC caps are mains voltage with 2 pins at each side and have a diameter of 22mm. The most well known wattages are 60W and 100W which would now be replaced with 7W or 13W LEDs. A 60W light bulb produces 800 lumens and a 100W light bulb produces 1500 lumens, these wattages are now banned in the EU.

This style of light bulb is known as a GLS which stands for General Lighting Service and are also available in an E27 screw cap. 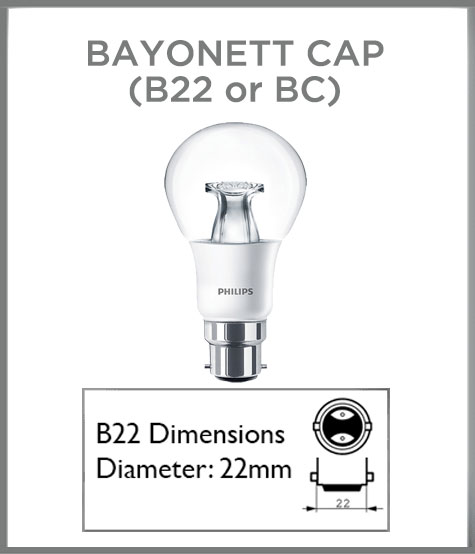 Edison screw caps are also known as ES, they are more common in America and Europe but are becoming more popular in the UK especially with outdoor lights and European brands of light fittings. Known as E27 as they have a screw in cap with a 27mm diameter. Apart from the difference in cap types, the E27 is identical to the B22. They are mains voltage and are available in various wattage types. 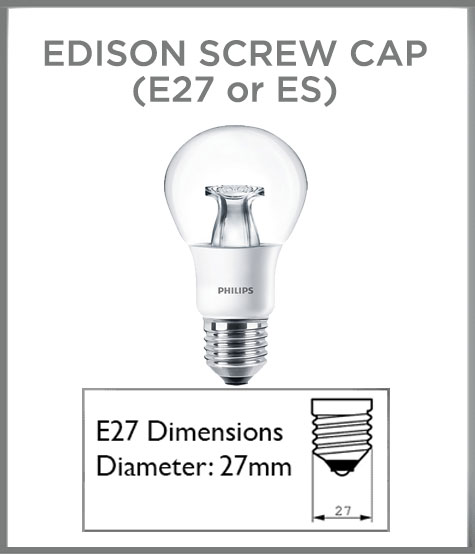 Small Edison screw caps are also known as SES and are mainly used in table lamps, wall lights and chandeliers. They have a screw in cap with a 14mm diameter. They are mains voltage and are available in various wattage types mainly alternatives to 40W and 60W. 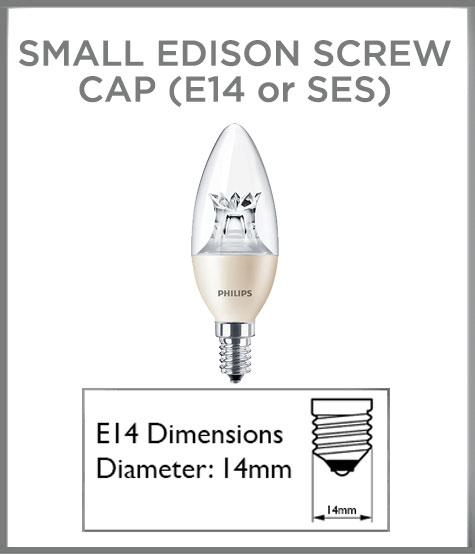 Light bulbs with this cap type are usually physically identical to E14 but have pins on each side, like the child of the B22 and E14. This cap is becoming less popular and many manufactures are choosing not to produce an LED B15d version. 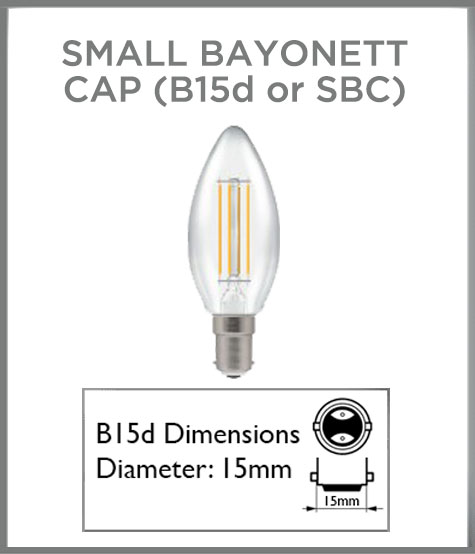 Originally designed for use with halogen, the GU10 cap has become our most popular choice of cap type for LED lighting. The GU10 cap is mains voltage and has two stubby pins that need to be twisted in and out of the light fixture. It's known as a GU10 because their is a gap of 10mm between the centres of each pin. This type of lamp has become the number choice for downlight fittings as its easy to replace, available in different colour temperatures, beam angles & lumen outputs and its cost effective. 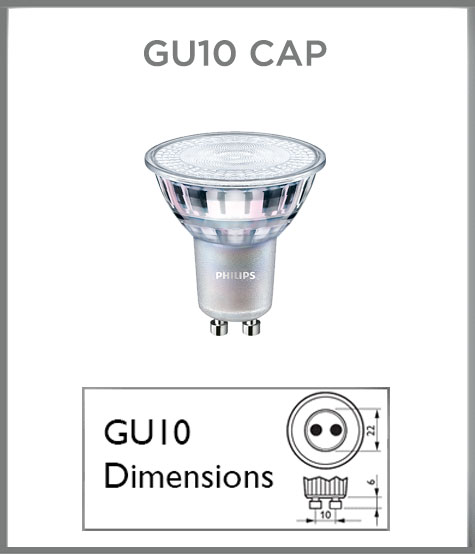 This type of cap has 2 sharper pins that have a gap of 5.3mm between them, which is why they correct name for them is GU5.3. The MR16 name can also be used with GU10. 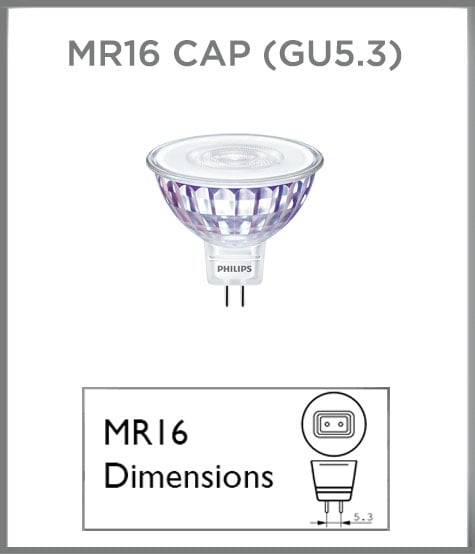 They're not classed as light bulbs as they don't have caps, integrated LEDs are light fittings containing a fully integrated LED light source that is built directly into them, the LED is usually non replaceable. The idea behind these types of fittings is that because the light fitting is specifically designed around the LED light source it can provide more light (lumens) while maintaining a longer lasting and more reliable solution. Integrated LED lights are usually mains voltage as they are also fitted with an LED driver.

Many consumers still don't like the idea of integrated LED downlights, mainly because if they do fail you need to get an electrician to disconnect them and swap them over. Most of them are wired into the mains. However, more of the premium downlights we stock are now supplied with a plug-in wiring connector. One side of the wiring connector is physically wired into the lighting circuit. The other connector is wired into the downlight. You can then connect and disconnect the downlight to and from the lighting circuit without having to rewire any terminals...A plug and play system that makes integrated LED technology just as good as the lamp + can design. 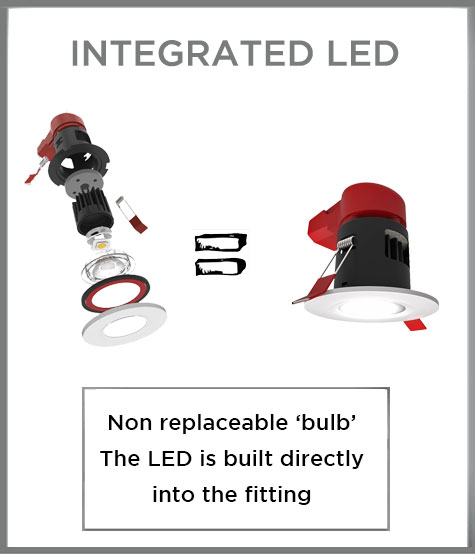