Since the arrival of the technologically advanced integrated LED downlight in 2010, consumers are now faced with the choice between integrated or GU10 downlights. Each type of downlight has advantages and disadvantages over the other, but which one is better?

The main strength of an integrated downlight is also its main weakness. Integrated LED downlights have a much longer life expectancy but the LED isn't replaceable. The earlier versions were designed to last for 50,000 to 100,000 hours. This ultra-long life span has been reduced to 25,000 to 40,000 in recent years. In the event of a failure you have to replace the entire fitting where as GU10 downlights have replaceable LEDs.

Integrated LED Downlights are not for Pessimists

While the optimistic view will be that they will ‘last forever’. Pessimists will ask "What happens when they fail?" If they do fail they need to be disconnected from the mains and replaced with the same fitting so that they match.

Downlights.co.uk has been selling integrated LED downlights since they launched and sometimes they do fail but the failure rate is very low, much lower when compared to GU10 LEDs. Failure rates can vary but if you invest in high quality downlights such as Aurora, Collingwood or JCC then the failure rate is negligible, lower than 1% and newer models are evolving all the time.

Another advantage of choosing a leading brand like these is that the design rarely changes, they have perfected their products like Volkswagen have done with their Polo or Golf models of cars.

To provide consumers with more confidence on this new technology manufacturers offer longer guarantees of 5 to 7 years, compared to 1 to 5 years for GU10. Integrated downlights are generally brighter, look better but cost more. While GU10 downlights have replaceable LEDs and usually cost less but are less reliable.

Overheating is the number one cause of LED failure; integrated LED downlights are designed to deal with heat dissipation more effectively. Because the fitting is manufactured specifically around the LED light source, they are designed to last around twice as long and are more reliable.

They are fitted with a much more substantial, advanced heat sink that effectively transfers the excess heat away from the LED chip allowing it to run cooler, for longer. This design also allows for bigger and brighter LED chips to be used.

In comparison to GU10 downlights you are often mixing together two random brands of products that were designed exclusively for use with each other. Over the years we've discovered that we get a higher failure rate when GU10 LEDs are used in traditional fire can style downlights. This is because the fire can restricts airflow to the LED and allows heat to build up, this is less of an issue if they are not left on for longer periods as the heat doesn’t have time to generate.

Not all GU10 fire rated downlights have this weakness, the Ansell iCage and Integral EvoFire are open rated and fire rated. This dynamic combination allows the GU10 LED to ventilate and we’ve also concluded that when the iCage is fitted with a Philips GU10 LED, it is even more reliable than some integrated downlights, only time will tell to discover which downlight wins the test of time. The Aurora EFD Pro is another type of fire can style GU10 downlight, but this has ventilation holes in the side to provide adequate cooling.

Often the demands of the individual lighting project can help to determine which downlight to go for. If you've got a low ceiling void space and you need a fire rating then you can rule out most GU10 downlights as they are at least 100mm in depth. Integrated ones are much more compact in size and can be as shallow as 40mm while maintaining a superior lighting effect of over 400 lumens.

By using our new compare products feature you can quickly compare up to 3 downlights, just click on the 'add to compare' button when you're on any products or category. Here is a comparison example of the Aurora EFD Pro versus the JCC V50: 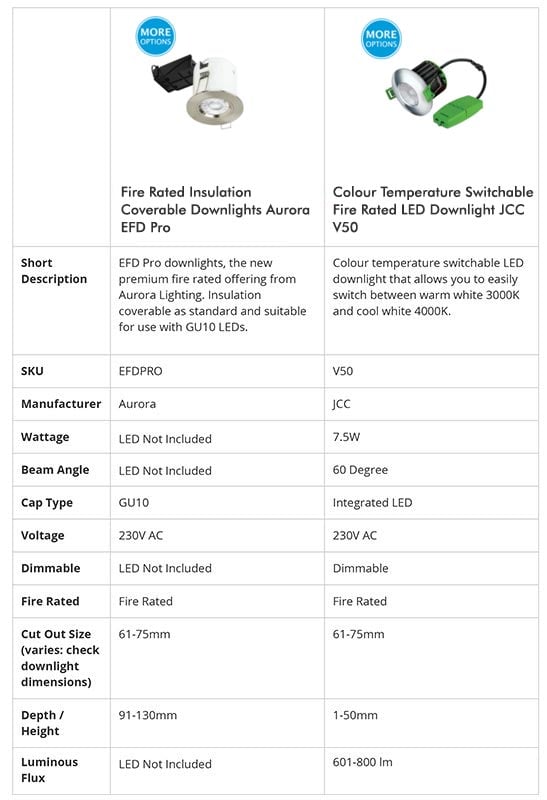 As you can see in the comparison table shown above, the Aurora EFD Pro is a GU10 downlight which doesn't come with an LED. The V50 has an integrated LED light source. Comparing these products in this way isn't very useful as you can't compare the lighting capabilities. The best way to do this would be to choose a GU10 LED such as the Aurora 5W Ice lamp and compare the wattage, beam angle and lumens against the V50. Once you've done this you will discover that the V50 is brighter.

Almost every LED lamp and LED downlight is available in warm white 3000K and cool white 4000K colour temperatures. Cool white LEDs have a brighter lumen output. In this case the V50 is 600-650 lumens and the Aurora 5W Ice GU10 is 500-520 lumens. When you're comparing the prices of each type of downlight you need to add up the price of the GU10 LED and the GU10 downlight, then compare the final price with an integrated unit.

The integrated downlight is technologically better, although it really does depend on which types of downlight brands and models you're comparing. The next question on your quest to find the perfect recessed downlight might be which downlight?