How to Upgrade From Halogen to LED?

With the ban on halogen now firmly in place from 2016, there are still lots of halogen and incandescent lamps out there wasting energy and draining the earths resources. These energy hungry relics from a distant past need to get upgraded to LED. LED is 90% more efficient and lasts for 10 times longer. There are a 3 main options of upgrading from halogen to LED, choosing the right option for you depends on the type of downlights and halogen lamps you've currently got. 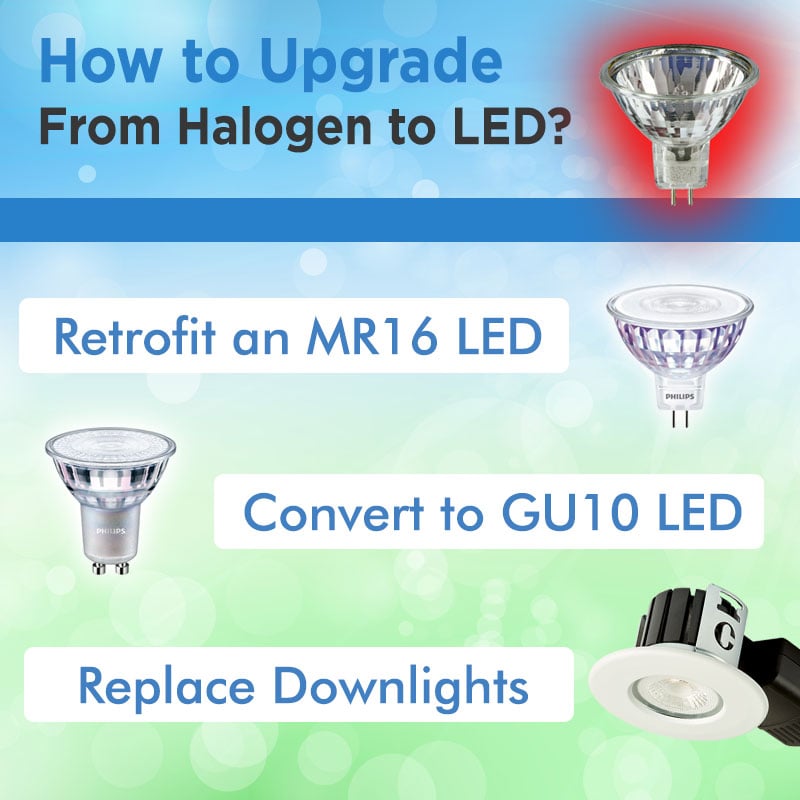 If you're replacing low voltage MR16 50W halogens that have low voltage 12V transformers, the first and obvious option is to replace it with something like an MR16 LED. These retrofit lamps should operate from your existing transformers. Because these particular LEDs operate on AC (Alternating Current) rather than DC (Direct Current) you don't need to use a special LED driver. But this isn't always the case as MR16 LEDs aren't always universally compatible. This often results in you having to replace your transformers. But...You don't find out that they're not compatible with your transformers until they start flickering or randomly flashing. This happens more-so when you're dimming them. Then its back to the drawing board which means replacing the old transformer with a new LED compatible one which would be the Varilight YT transformers.

This involves additional costs, more time and more messing about - which nobody wants. Another consideration is that if you do plan to dim them, you're going to need to ensure that the LED, the transformer and the dimmer switch are all compatible with each other. The Varilight YT transformers combined with the Varilight V-Pro dimmer switches are compatible, as are the Philips MR16 LEDs. A winning combination! But you've now spent more on these items than you would with options 2 and 3.

Again if you're replacing low voltage halogens but want to keep your existing downlights you can convert them into mains voltage GU10 by ordering some basic GU10 lamp holders, a GU10 lamp holder with connector block and GU10 LEDs. This involves disconnecting the transformer and some re-wiring which should be done by a qualified electrician.

Install brand new downlights. This option opens up a whole new world of opportunities for you. You could either install new GU10 downlights or integrated LED downlights. In short, integrated downlights have a built in and non replaceable LED, while GU10s are usually cheaper with a replaceable LED. GU10 LED downlights are not as good in terms of light output, life expectancy or guarantee periods. Check out our sale items for our latest special offers on downlights, LED light bulbs and more.

This is easy and now straightforward to do because LED GU10 lamps can be swapped straight over without any wiring or transformers to consider. Here are some options for you to consider if you're replacing your 50W halogen GU10s:

The Evolight from Integral offers another alternative to MR16, GU10 and integrated LED. These LED modules can be used with your existing halogen downlights. They come with a push-fit connector block that allows you to disconnect your transformer and wire them straight to the mains. The end result gives you a type of replaceable LED that operates like an integrated LED downlight.

Also available to buy as a complete unit known as the EvoFire+ which includes a fire rated downlight frame, LED module and connector block. If this product range had been invented during the earlier days of LED lighting (back in 2010), it would be everywhere! Either way, its a very good design and is available in a variety of finishes, colour temperatures and with an insulation coverable version. 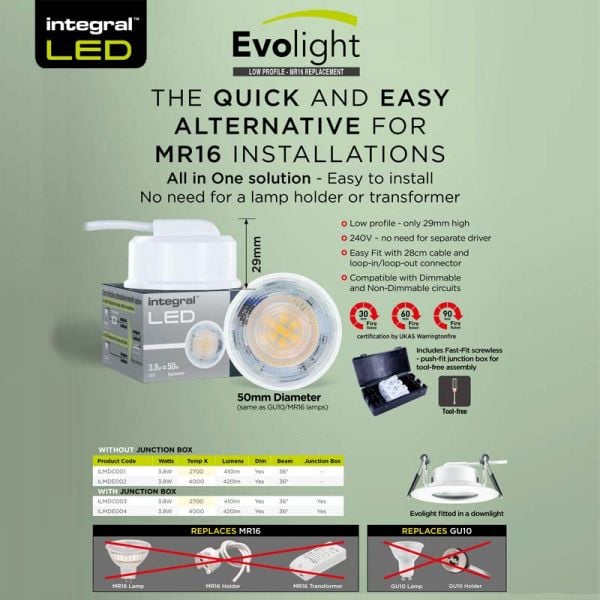