Why is High CRI Lighting Better?

CRI stands for Colour Rendering Index. It is a measurement of how well a light source can render the true colour of an object compared to natural light. The natural daylight effect that's produced by the sun. The rating system goes from 0 to 100, with an open flame or sunlight being a perfect 100. Older lighting technologies like low-pressure monochromatic sodium vapor lamps (known as a SON) have a CRI of 25, shown below: 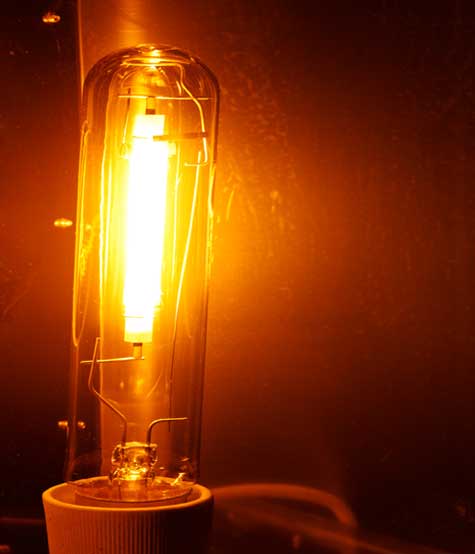 With a lower CRI rating, lighting in areas will become more distorted, with this orange and murkey looking appearance that you may have experienced in old car parking garages or street lighting. Your eyes will struggle to differentiate between different shades of the same colour.

The CRI rating attribute can be displayed in 2 ways:

Both ways mean the same thing, that the light source is rated at 80 out of 100 in the colour rendering index scale.

Digging deeper into this subject involves a lot of scientific jargon and formulaic expressions to fully understand, but for everyday consumers, why high CRI is better in your choice of lighting depends on how well you want your environment to look beneath artificial illumination. There are many benefits of CRI lighting at high ratings both at home and in the workplace, and this article will try to shed some light on why.

Light Bulb Regulations In The UK

Incandescent light bulbs were the main source of artificial light since the days of Thomas Edison in 1879 up until fairly recently. The incandescent lamp had a rating of 100 CRI, but was phased out and even outlawed for home use in many parts of the world, including the EU and the UK beginning in 2009. This is because; though they do emit a great amount of luminosity, they aren’t energy efficient.

Around 95% of the energy output of an incandescent light bulb is wasted on heat rather than illumination. Today’s more eco-friendly LED lights are many times more efficient at converting energy into light, and some estimates for Europe claim the switch has helped reduce carbon emissions by 15 million tonnes per year.

The lifespan of a traditional incandescent light bulb is equally abysmal when compared to fluorescent and LEDs. An incandescent light bulb used for home lighting will typically last for only 1,000 hours, while fluorescents can keep operating for 10,000 hours, and LEDs last for an amazing 20,000 to 30,000 hours - even longer for integrated LED light fittings. That efficiency has come at a price, however, as neither fluorescents nor LED lights can give the same CRI rating as incandescent bulbs - though manufacturers have gotten close in recent years.

A CRI rating wasn’t something commonly talked about among most people, let alone advertised on a light bulb’s packaging. Everyone just expected high CRI as standard until they compared flourescent and LED with incandescent or natural daylight. The general rule is that any number in the 90s gives excellent CRI, while a score in the 80s is classified as good. Anything below 80 would offer noticeably sub-par illumination of an object’s true colour...A distorted interpretation of its true identity.

High CRI lighting is better because it reproduces a more realistic depiction of colour. While a lower CRI light will distort it. Some examples to further illuminate this point:

Hospitals - there are several different areas of a hospital and all of them have unique requirements for lighting. Observation areas, examination rooms, and especially where diagnoses are made and treatments like surgery performed both rely a great deal on an ability to see colours in rich detail.

Advertising - being able to promote products by displaying their vibrant colours is a reason why high CRI is better suited for department and grocery store lighting. Car dealerships also use excellent CRI lighting on their showroom floors. A butchers would want their meat to appear red and fresher with more vibrancy, rather than burgundy and stale. The following images compare how meat would look with each CRI rating we've discussed. 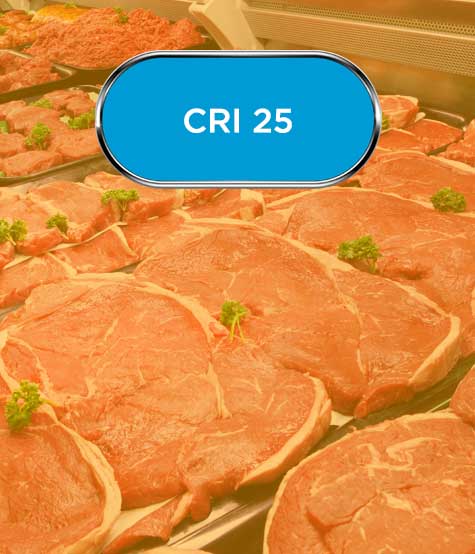 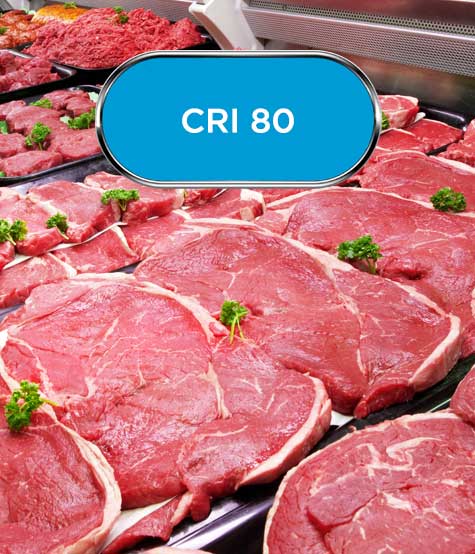 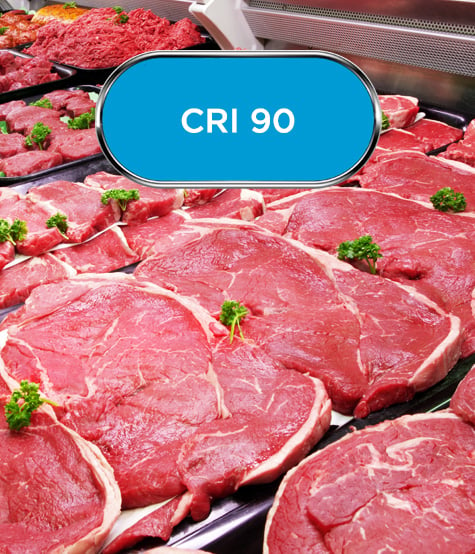 While the difference between 80 and 90 CRI is subtle, the reds appears redder. The higher the CRI rating, the fresher and more vibrant the meat becomes. Less distortion of its true representation.

Home décor - whether you do home decorating for a living or as a hobby, the benefits of CRI lighting is it makes colours pop as opposed to looking drab. Real estate agents especially know why high CRI is better when showcasing properties.

Photography - many photographers prefer to shoot using daylight, and the reason is the way it brightens colours. Indoor photo shoots can benefit from using lighting with a high CRI to make up for the lack of natural light. LED and fluorescent bulbs with a low score on the colour rendering index can also make people’s skin appear pale and sickly, which is why high CRI is better suited for portraits and photos that need to portray a sense of life and movement.

Workplace - LED lights have been especially used in industrial settings and offices. The longer lifespan of LEDs compared to incandescent light bulbs makes them a much more cost-effective light source throughout the year. That they don’t throw off as much heat as incandescent bulbs also saves on air conditioning costs during the hotter months. But why high CRI is better to have than LEDs that rank low on the index is something managers have become increasingly aware of. Factories need workers to be alert and able to notice small details on products, and light with high colour rendering can produce that. Office workers have also been noticed to respond better to it, as it makes people and the environment appear more crisp and healthy - effects that promote healthier psychological feelings. The same holds true for children in schools.

Film and TV - much like photography, the benefits of CRI lighting with a high rating are the results on picture quality. Filmmakers and TV producers have long used a huge amount of lighting to make colours stand out better. This used to be done with incandescent, halogen, tungsten, HMI, and other types of light bulbs, but the extraordinary amount used on film sets meant that uncomfortable temperatures were generated. LEDs that shed little to no heat and with high CRI ratings are quickly replacing them.

If you've ever attempted an adults jigsaw puzzle, something with around 1,000 pieces, trying to connect pieces with slightly different shades of the same colour is really difficult, even in daylight conditions. Under lower CRI lighting you'll be left feeling completely puzzled. You need a higher CRI lighting source to help your eyes to differentiate between the various shades of blue for the sky and green for grass. Although, even with a CRI rating of 90 used in this puzzle of Stonehenge, you still have to put the hours in to complete it. 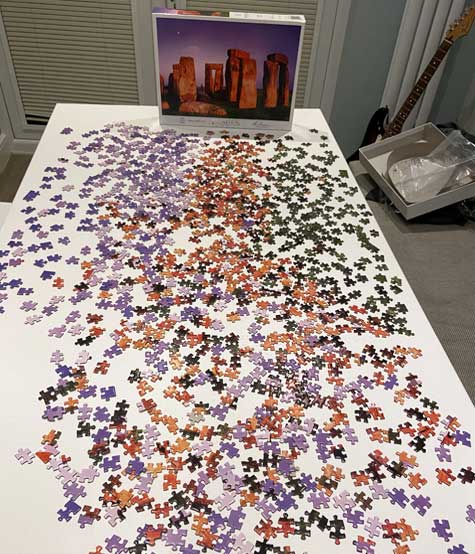 What High CRI Doesn't Do

It doesn't make a room appear brighter; brightness is a measurement of lumens with 400 lumens providing the equivalent brightness of a 50W halogen. It doesn't make a room appear warmer or colder; this is a measurement of colour temperature, halogen lamps and incandescents were predominantly 2700K, which is extra warm white. A high or low CRI rating is available with every light source and is a very important specification to consider. Many consumers who've compared the difference now opt for a minimum of CRI 90 as standard.

When the first generation of LED lighting arrived on the marketplace, consumers were not only put off by the price but also by the quality of the light. The higher colour temperatures combined with the lower CRI ratings produced a blue style of light that looked fake. Many cheap unbranded LEDs at the time actually gave LED lighting a bad name for many years. At Downlights.co.uk, we've always stuck with offering branded LED lighting products from Philips Lighting who were light years ahead of the game. They had a minimum of 80 CRI and now have many options available in 90 CRI.

The Future of Lighting

While high CRI for some brands is a premium offering that you're expected to pay more for, we've standardised on high CRI on our LED strip tape and only offer a CRI rating of 90 throughout our LED Strip Fit brand. A premium product at an ordinary price.

If you're looking to enhance your workspace or make your home feel healthier, more inviting and visually more appealing, then its well worth comparing the difference as you'll never go back. Once you've realised the benefits of higher CRI anything else will be second rate.

Other high CRI lighting products we offer are LED lamps and integrated LED downlights which can be located by clicking on the images below. High CRI integrated LED downlights in-particularly have been somewhat of a rarity since their conception but have become more popular in recent years as consumers have started to appreciate this concept and want to achieve the best possible lighting results for their homes or business. 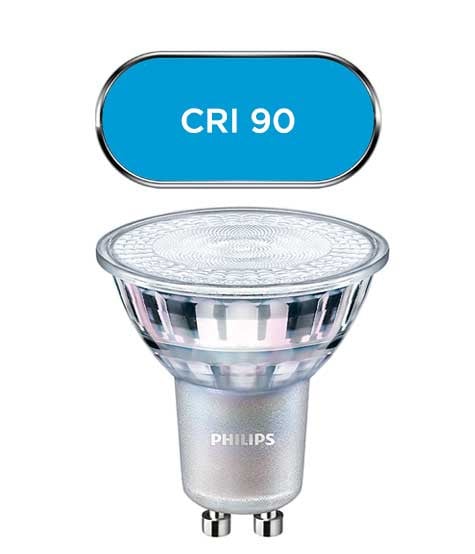 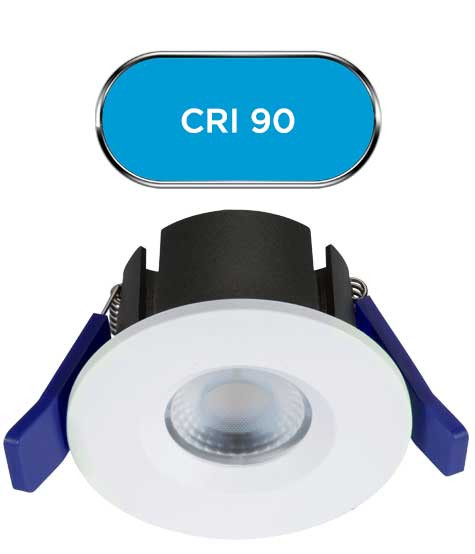 We also have a few excpetionally high CRI rated lighting products, with the Philips Expert Colour GU10 which has a near perfect CRI 97 rating. Or the Collingwood H2 Pro or H4 Pro smart downlights which have a CRI 95 rating and some Integral miniature LED downlights, which available to view here.