Every light source from an LED light bulb to a simple wax candle has got a beam angle. A beam angle is a measurement of how the light is distributed. GU10 LED lamps and recessed downlights have a fairly narrow beam of around 40 degrees, anything within 5 degrees of this is the industry standard. A wax candle or traditional light bulb would have a beam angle of 360 degrees as the light shines all the way around but is less focused.

By selecting a light with a wider beam angle you don't get any extra light, it just spreads the light out further and more evenly. The brightness (measured in lumens) remains the same but the beam intensity (measured in candelas) decreases as you go wider. For example the Philips 5.5W Expert Colour GU10 LED has a light output of 400 lumens. The 36 degree beam version has a beam intensity of 800 candelas and the 25 degree version is 1050 candelas. Candelas is often shown as cd., it isn't a value that's used regularly and most LED lamps and downlights don't even have a value. The narrow beam is 25% more intense but if you were comparing both lamp options within the same lighting design, you'd need to position the narrow beams closer together to avoid dull spots. 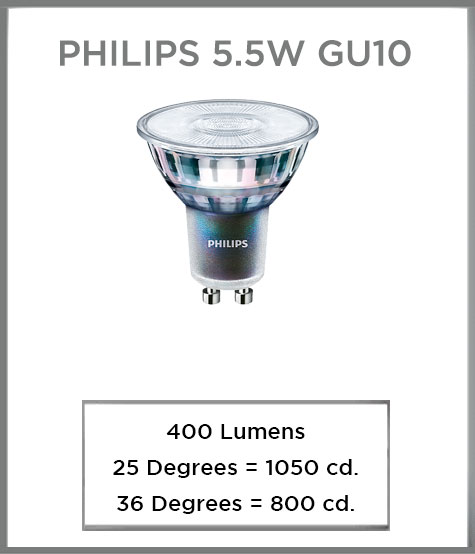 Within the cone of light, the brightest area is the central point of the beam, directly below it. The light gets dimmer closer to the edges of the cone, if you can overlap the cones of light where they meet at 50%, you'll get 100% uniformity throughout your lighting design, which get you an A+ if you were doing a lighting design course.

The downside to a wider beam angle is that it's not as intense, the centre of the beam of light doesn't go as far. Choosing the right beam angle can make a big difference in a room, but you don't always have the option as most downlights have a set beam angle without any options. If you know which beam angle you want from start, this can often limit your purchasing options to just a few LED downlights especially if you want something specific like 25 degrees. 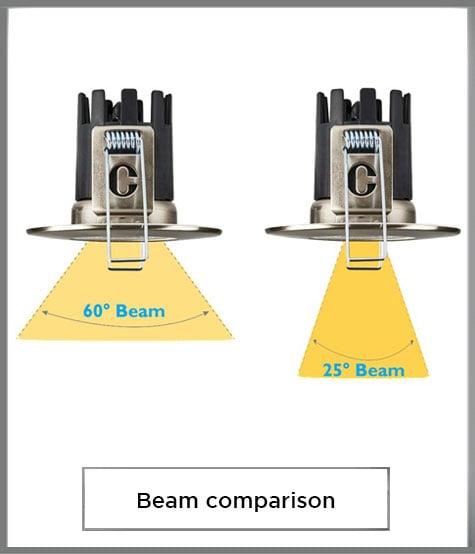 One of the best examples of using a wider beam such as 60 degrees would be in a lounge area. Lounges don't need to be as bright as other rooms like kitchens and are usually illuminated to around 150 average lux. This is because you're only performing basic tasks like watching the TV or reading. In comparison a kitchen should be around 300 average lux as you need to see what you're doing more clearly. By using a wider beam you can space out your downlights further apart, rather than having them spaced 1 metre apart you can go to 1.2, 1.5 metre or up to 2 metres apart from each other. You then use half of the this distances from the walls. 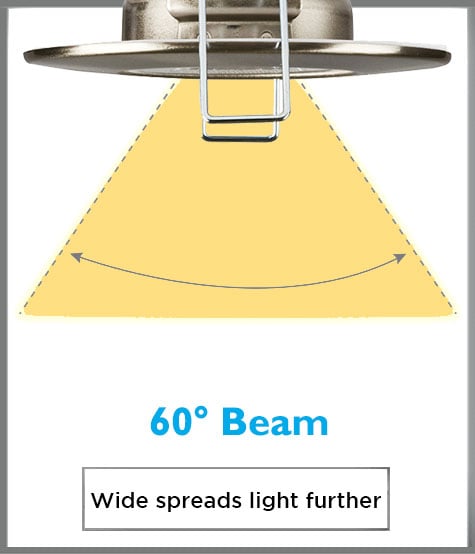 If you were to select a wider beam angle in a kitchen and the downlights were only 1 metre apart it would be pointless especially if the room has dark walls or cupboards. The wider spread of light would get directed onto the surfaces and you would loose some of the light due to the low reflectance levels. The darker surfaces would absorb some of the light.

A good example of using a more narrow beam angle of 25 degrees would be in a room with high ceilings. Anything over 2.4 metres (8FT) is classed as high. The cone of light would open up further at ground level and give your room a bright and even lighting effect. If you used a wider beam angle in higher ceilings some of the light will get diluted and not reach your working plane. The working plane is the level of height that your basing your lux calculations from within thr room. Some rooms have a working plane at floor level and some rooms like kitchens have it at the cupboard worktop level. A narrow beam angle can also be used effectively in outdoor downlights as they're position very high up, its the ideal application for them. 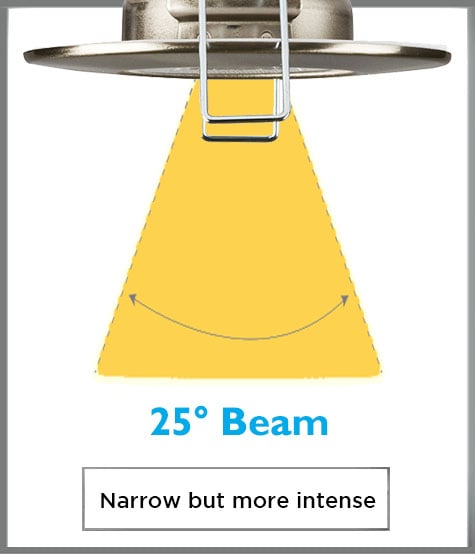 How Do You Choose a Beam Angle?

If you're looking for an integrated LED downlight with a choice of beam angles the Halers H2 Pro550 from Collingwood Lighting is worth considering. It's available in 38 or 70 degrees. You could even have a mixture of beam angles in the same room! Why not install wider 70 degrees in the centre of the room and a border of 38 degrees around the edges?

We also have the Philips 5.5W high CRI GU10 LED that's available in a choice of beam angles including 25 and 36 degrees. Used in the right application such as a spotlight or track light fitting that's illuminating a picture on the wall, a narrow beam will really brighten it up. The intense and more focused beam of light will make a big difference in highlighting the picture. Or using multiple spotlights together to enhance the brightness, shown in this art gallery below: 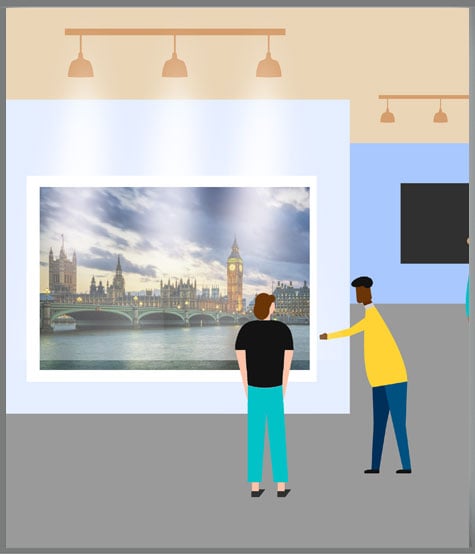 Ultimately within a lighting design you want to achieve the best possible uniformity - no dark patches and no overly bright pools of light. Nice even and consistent across the entire space and without overloading the ceiling with too many lights. Brighter downlights with wider beam angles are perfect for living rooms and bedrooms. Kitchens are the most difficult rooms to illuminate as they're filled with cupboards and work tops which usually leaves you with a difficult shape, or floor area to enlighten. You need to create an even grid layout for the downlights to be placed in so they don't look out of place while delivering a bright and even light spread.

Unlike in ghostbusters were you're not supposed to cross the beams, crossing the beams of lights in a downlight installation is recommended. If you imagine getting the brightest amount of light at zero degrees directly below the downlight, when the light cones reach 50% around the edges, this is where you'd try to overlap them. This would also combine 75% and 25% if you measured the lux at different distances and would give you the 100% uniformity that you're aiming for. 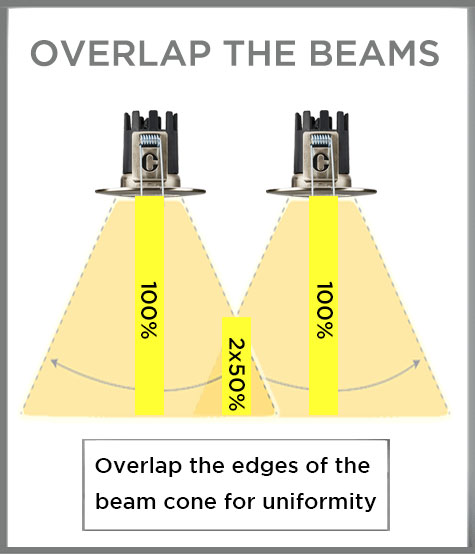 If you're unsure about which beam angle to choose, selecting anything from 35 to 45 degrees will work fine in the majority of room types, but it does depend on the application and spacing of the lights.