When faced with the task of choosing recessed downlights for your home or business, one of the first considerations you may be presented with is:

Do I need fire rated downlights? - Here is a brief explanation about why they exist...

When a hole is cut into a ceiling to mount a recessed downlight into, a potential fire hazard is created. Plaster board ceilings (for example) have a natural ability to act as a fire barrier. In any building where people maybe living or inhabiting above, the ceiling below must be fire rated. Fire rated downlights are used to restore the fire integrity of a ceiling.

In the event of a fire, the downlight hole is like a gateway that allows fire to spread through, unchallenged. Once the fire starts to spread through this hole it has direct access to the adjoining structure, usually made from wooden ceiling joists. Fire rated downlights seal off the hole and slow down the spread of fire. Modern fire rated downlights are fitted with an intumescent pad which swells up when it reaches a certain temperature and blocks the spread of fire. The fire then has to find another way around - delaying its progress.

This delay allows occupants to escape the building or ideally allows additional time for the fire to be extinguished. You will notice that some fire rated downlights are rated at 30, 60 or 90 minutes. This rating depends on the structure of the building and more importantly how many floors it has. The top floor of a block of flats for example would require a 90 or possibly 120 minute fire rating, whilst a ceiling in the bottom floor of a house would be 30 or 60 minutes.

If you cut into a ceiling you must restore it to its original condition and not interfere with its natural ability to act as a fire barrier. Surface mounted downlights don't need a fire rating, only recessed downlights have this requirement. If you're installing recessed downlights into a commercial grade ceiling with a concrete structure and false ceiling, you don't necessarily need fire rated downlights.

Where Should they be Used?

The Electrical Safety Council (ESC) recommends that fire rated downlights should be used in all ceilings, regardless of which type of building they are being installed in. CLICK HERE for more information.

Legally any work carried out at a commercial or residential property must adhere to the Building Regulations. Fire safety is covered by Part B and is split up into Volume 1 for domestic dwellings and Volume 2 for buildings other than dwellings, which be commercial buildings. 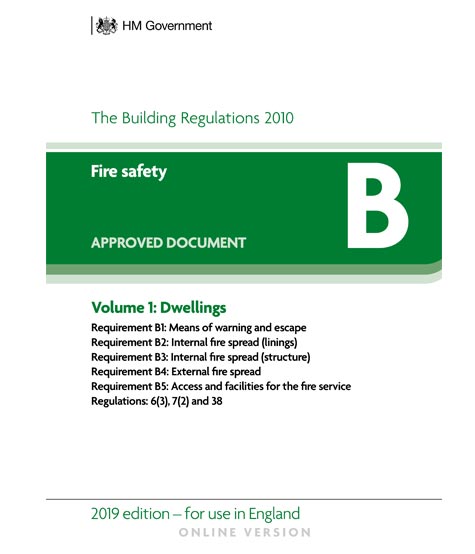 Most fire rated downlights are rated for 30, 60 and 90 minute ceiling types, so you don't always need to concern yourself with knowing what the difference is between each type. Occasionally a downlight will only be rated to 30 or 60 minute ceilings and not for 90, but this is rare. For reference, here are the 3 different ceiling types to consider:

Constructed from a 600mm joist centre with a single layer of 12.5mm thick plasterboard.

Constructed from a 600mm joist centre with a double layer plasterboard which is 15mm thick.

Constructed from a 450mm joist centre with a double layer plasterboard which is 15mm thick.

Most LED downlights, especially integrated versions such as these popular models: Aurora MPro, JCC V50 and Collingwood H2 Lite are fire rated as standard. This is becoming increasingly popular with other brands meaning you don't always have the option of using non-fire rated. Don't dwell too much on this subject, its easier just to fit fire rated and you're safer from fire and building inspectors if you ever sell your property. Building Regulations can change over time, so if you do fit non fire rated without any fire hoods you might have to change them later.

This is a fairly new specification within the lighting industry. An I-joist is a wooden beam that's shaped like the letter 'I'. They have top and bottom flanges and carry more weight, without bending that traditional joists. For a downlight to be I-joist compliant, the specific downlight should have a test certificate to match the specific I-Joist its being used with. Many of the bigger lighting brands have tested their best selling downlights with the main I-Joist and have certificates which are available on request.

An example of a test certificate can be viewed here. Which is for the JCC V50 downlight.

This helpful video below from Efixx goes into further detail about I-Joist compliance using some of Collingwood Lighting's popular H2 and H2 downlight models.

All of our fire rated downlights can be viewed here, you can also quickly narrow down your search between many other options including integrated or GU10; or feel free to contact the UK's downlights experts for further advice on tel: 01706 868343.